The Trustees of Southern Thailand Elephant Foundation (STEF) are delighted to launch this website and with it this new and important charity.

There are many bona fide organisations working to help elephants in Thailand but sadly there are also some commercial operators that are exploiting the elephant for their own financial benefit. 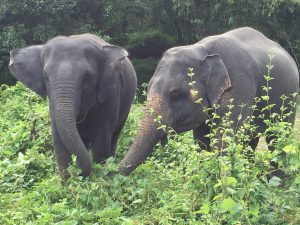 STEF was set up in late 2017 to help channel the generosity of the many people who want to help preserve the magnificent Asian Elephant in Southern Thailand by promoting Education, Welfare and Health care, and through understanding, explaining, and enhancing the pivotal position that the elephant has in Thai culture.

Thailand is not Africa, and the Asian elephant is not the African elephant. Wild elephants in Thailand are very difficult to count given their dense, forested habitat, but most experts agree there are between 2,000-3,000 elephants in the wild, and these are recognised by the authorities as a fully protected endangered species. But, Thailand is not a large country (it is about the size of France) and as saturation point is reached, human-elephant conflicts arise as elephants encroach on expanding villages, crops, or farms. So, there are challenges ahead for those in the wild. 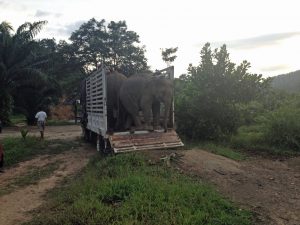 But what about the domestic elephant? Thailand’s current population of domesticated elephants is also thought to be about 2,000-3,000, and most work either in the tourist industry or in the forests, but each with a carer (mahout) and often his dependent family. A world must be found where these unique and remarkable animals can be preserved safely and humanely, with a life where they 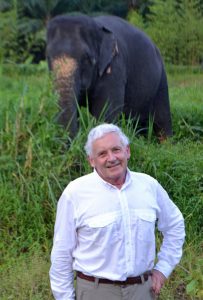 are used but never abused. This is the objective of Southern Thailand Elephant Foundation.

Commenting on the launch of the charity, the Chairman of Trustees, Dr Andrew Higgins, said:

“STEF seeks to ensure that all domesticated elephants in Southern Thailand are cared for with humanity, and to the highest possible health and welfare standards. We plan to work with elephant owners, schools, and tourist organisations to provide support for research, teaching and by example through our various programs and initiatives to benefit not only the Thai elephant but also those who care for them, and to safeguard the elephant’s place for future generations”. 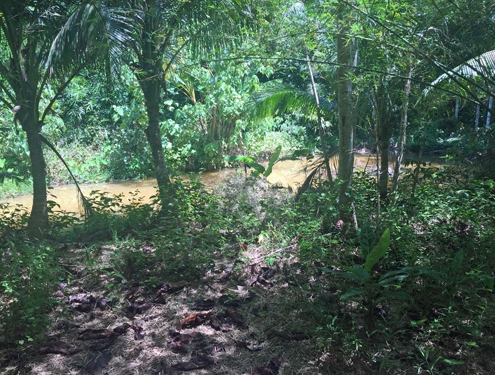 In the central area of the site, several man-made pools were discovered – their former use being to irrigate the commercial rubber trees and other plants on the site, which have since been partially cleared as you will have read in our previous posts. We desperately want to make use of these pools, and to integrate them into the elephants’ natural habitat and provide them with an access for bathing and cooling as well as drinking. It is vital that Asian elephants have regular access to a large water source in order to hydrate properly, maintain a healthy skin condition, and of course to cool down as elephants are unable to sweat through the skin. 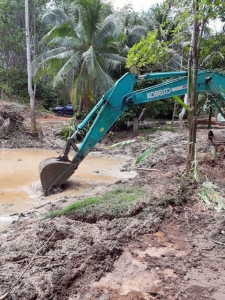 After our Technical Adviser, Lee Sambrook, discovered that there were three pools, not two as first assumed, a plan was formed to check the pools for wildlife before any work was carried out. We felt it was so important to understand the implications of disturbing the habitat, and the need to preserve and enhance the ecosystem as we undertake our work to restore the land.

The survey of the pools was undertaken by one of Phang Nga Elephant Park’s young but very enthusiastic Volunteers, Cameron Mays, who has had considerable previous experience in marine wildlife.

After visiting the site over a two-day period, Cameron  managed to find barbs, snails, 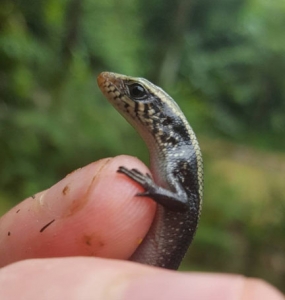 shrimps and the occasional frog and lizard, and he was able to identify the fish as mainly gouramis, which are freshwater fish native to Asia and very common to this region. As part of the survey, it was necessary to compare our findings to pond life expected in Southern Thailand, which includes catfish, Snakehead and 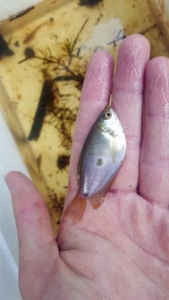 various Carp species, as well as the gouramis found by Cameron.

We hope this small survey will help us to continue to maintain our diverse wildlife residents once work has been completed. Meanwhile, if you feel you can help us, please think about giving just £25 to help make this a truly ecosensitive place for our elephant family.

Come back next week, to read another blog post on the new site….

We are already in the first week of April and since breaking ground last week at the new site, half of the rubber trees have already been cut down. Throughout this progress we have discovered even 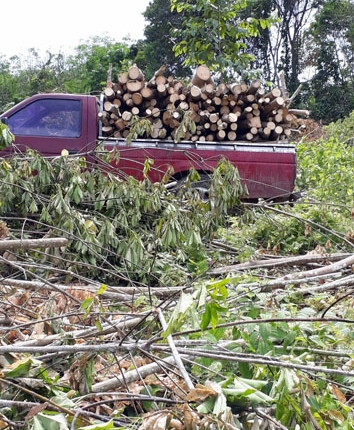 more plants and trees, such as banana, mango and even the occasional jack-fruit tree. 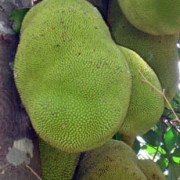 We are exceptionally pleased with this discovery because the elephants will have a greater variety of food to enjoy whilst grazing. Some of the plants and trees will be relocated and replanted in other parts of the site for the benefit of the elephants. With half of the removal of rubber trees, the site has become open and it looks quite different, showing even more potential for the Home of Rest for Elephants (more about that soon!). 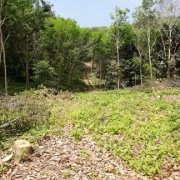 A local contractor has provided a construction excavator and a small team to help us clear the land. We have also started looking for a volunteer to help us examine the three man-made ponds at the site, to carry out a small survey to determine what species of animal may live in them.

Our immediate need will be to prevent erosion of the soil from the cleared land once the rainy season starts in May. This means planting trees and grass.

Can you buy a tree for us? For £25 you can have your own tree in your name or dedicated to a loved one. To plant a tree at Ban Ton Sae click here

Come back next week, to read another blog post on the new site’s progress! 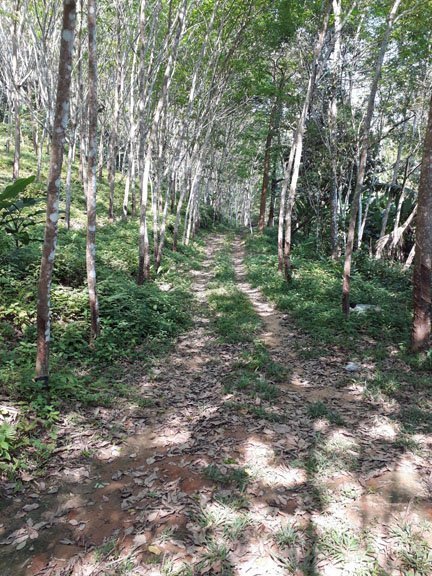 The newly acquired 16 rai (6.5 acre) site at Ban Ton Sae was previously used as a rubber tree plantation, but it also has palms that are harvested for palm oil as well as natural durian and other fruit trees. There are three large man-made ponds at the site, which were used for irrigation and form a lovely feature of the surroundings. The site has challenging sloped land and quite undulating surfaces. There are only three areas on the site where the ground can be described as flat, which makes the planning process very interesting as we have to be creative with our ideas for the new terrain. 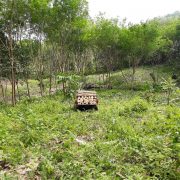 elephants. People from the local community are being employed to cut down the rubber trees and remove them from the site. The timber will be sold to generate funds to help pay for the conversion of the land to a more ecofriendly system that will include planting the most appropriate flora for elephants to enjoy in a natural environment. 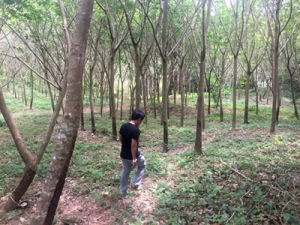 Here you can see photos of the new site just as we started to cut down the rubber trees in February 2018 – this is the first stage of recreating a perfect and ecofriendly environment for our future family of elephants. To help us, please click here. 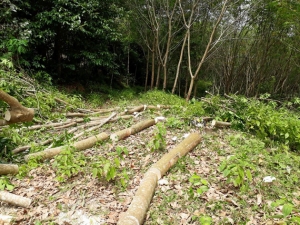 Southern Thailand Elephant Foundation (STEF) is delighted to announce the appointment as the charity’s Technical Advisor, of Lee Sambrook, one of the world’s leading elephant authorities. 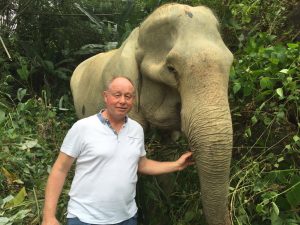 Lee is very well known throughout the elephant world and has a lifetime’s experience working with elephants and other large mammals. He worked in two zoos before starting work at the Zoological Society of London (ZSL) in the early 1980s. After seven years working with the elephants at London 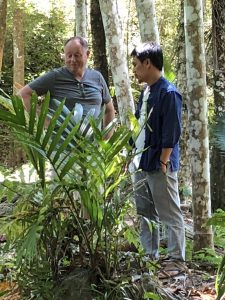 Zoo, he moved to Western Australia as Head Elephant Trainer at Perth Zoo, where he spent five years before returning to the UK as Team leader of Elephants at Whipsnade Zoo, where he had 11 Asian elephants under his care. He is particularly proud that ten elephant calves were born during his 21 years at ZSL. He is or has been a consultant for several zoos around the world.

Chairman of Trustees, Dr Andrew Higgins, said: “I have been fortunate to know Lee for several years and I am delighted that the Trustees have decided to appoint him as Technical Adviser. Lee’s advice, guidance and a lifetime’s experience will ensure all of our projects are undertaken with the best interests of the elephant in mind”.

Already Lee has spent several weeks at the new Ban Ton Sae site (pictured here with Jakrapob Thaotad, STEF Trustee and Project Manager) working hard to ensure the ground is cleared and prepared for the housing of elephants that are in need of care and retirement. 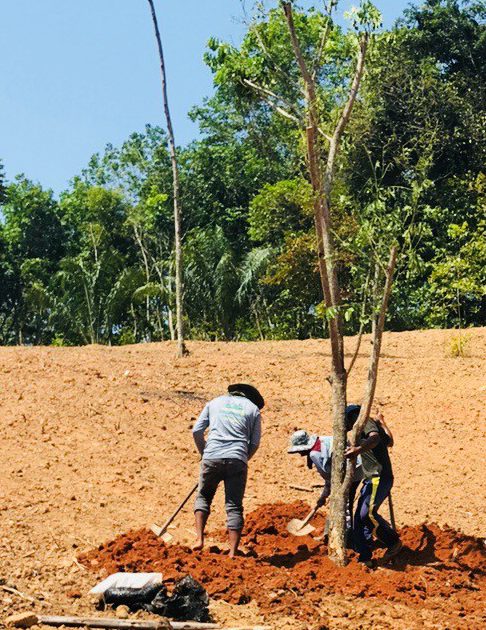 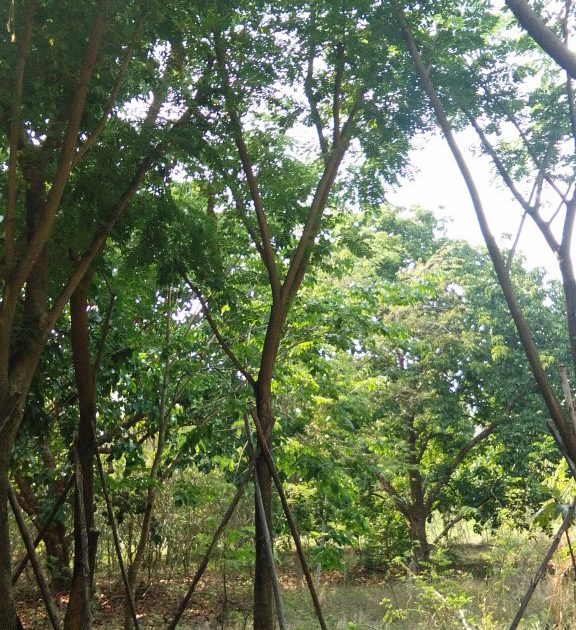 nce again be safely managed for the care of elephants. Hundreds of rubber trees have removed and many palm oil trees and new grass is now growing on the old plantation site. With the coming of the rainy season in May we are hoping this will really bloom in the next few months and become lush green grazing. The new, natural forest trees will grow fast to provide shelter and shade for our elephant population, and to provide additional food sources for the Park’s natural bird and animal populations. 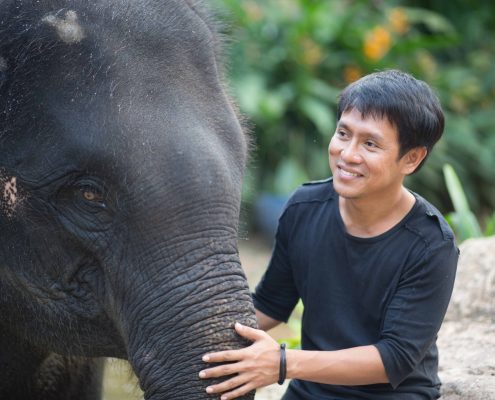 “Ban Ton Sae promises to be an important biodiversity site yet the rubber trees and palm oil plantations over the years have led to it becoming degraded and fragmented with a sad loss of species diversity. We want to nurture our flora in a sensitive ecological way while providing an optimal environment for our elephants”.

Everyone who supports our Sponsor a Tree campaign will know that they are helping in this vital conservation work.Names of donors will be commemorated on a plaque. Just click on Contact Us to tell us the name of who is to be remembered, then after that, please donate £25 or more if you can by clicking here.