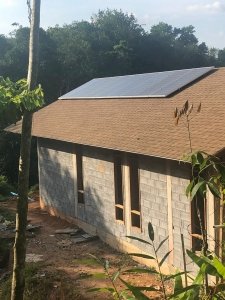 Thanks to the generosity of an individual donor, the completion of the office/laboratory for the veterinary clinic at Bon Tan Sae has taken a step closer with the installation of nine solar panels on the roof. The wiring from the panels leads to an inverter and batteries, which are housed inside the building. Much work has also been going on to the structure of the building, with the walls going up, and discussions taking place on the details of the internal layout.
STEF has been taking advice on the design and construction of the clinic from a Thai specialist elephant veterinarian and former Director of the Krabi Elephant Veterinary Hospital. 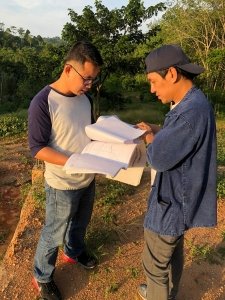 This hospital is currently the closest available treatment centre for elephants in Southern Thailand, but for most elephant owners in the Phang Nga region it is a four-hour drive away, which is why STEF’s community development project to provide a local elephant veterinary centre is so important (see Our Strategy).

This year has seen great progress in the development of the new centre, which has required major landscaping and tree planting, the construction of an access road, 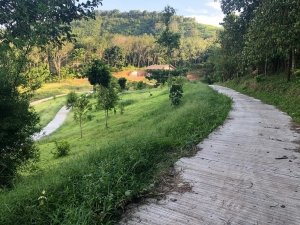 planning and construction of the office/laboratory building and laying the foundations for the elephant barn. Our supporters have been very generous, and we are indebted to the 2Rs Charitable Trust, the Alborada Trust, the Ofenheim Trust, the Beryl Evetts & Robert Luff Animal Welfare Trust, and the Animal Defence Trust as well enthusiastic and generous individuals. Without them this work would not have been possible.

The new solar panels will provide enough power to support the clinic building initially, but it is likely that we shall have to add more panels in the future. Once the elephant barn is constructed and the education centre has been built, we shall probably need a wind turbine as well – particularly in the rainy season. We are working hard to find the necessary funds to complete all the work. If you feel you can help, please get in touch (Contact Us) or you can Donate here.

We have exciting news from Ban Ton Sae, the site of the new elephant veterinary clinic.  Following our recent News post: We Need Water! (see News)  STEF has received a very generous donation of £10,000 from the Marjorie Coote Animal Charity Trust which has enabled us to start work on the bore hole.

We are incredibly grateful for this donation, which covers the cost of the bore hole, the holding tank and the water pipes.  As you can see from the photographs, we have wasted no time in getting the work started, and drilling has commenced close to the  clinic building, which itself is nearing completion. We’re delighted to be making so much progress on this much needed veterinary clinic, which will provide care –  free of charge – to domesticated sick elephants in the Phang Nga region.  See our Strategy

Funds are also in place now for the elephant barn, next to the clinic, where sick elephants will be treated.  The land surrounding the clinic has matured well following extensive tree planting, and is nearly ready to receive its first elephants.  Join us in making this project come to fruition for the benefit of elephants in Thailand.  Please Donate here. 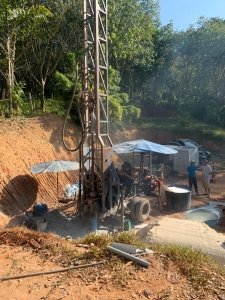 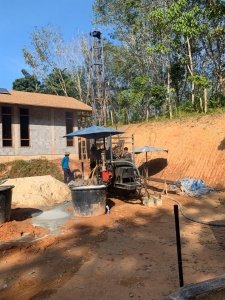 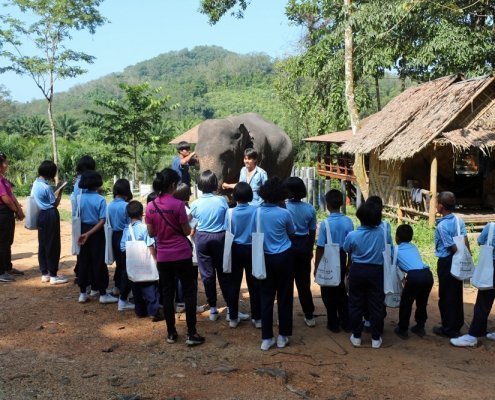 A group of enthusiastic school children recently enjoyed a day at the Phang Nga Elephant Park (PNEP) to learn about elephants.  This followed on from the inaugural visit by students in December 2018 (see previous news item) supported by STEF as part of its commitment to encourage education on the welfare and history of Thailand’s elephants.

The students came from the Yaowawit school in Kapong, 125km north of Phuket, which was initially set up to aid children affected by the tsunami in December 2004, and now educates some 138 youngsters from underprivileged families. 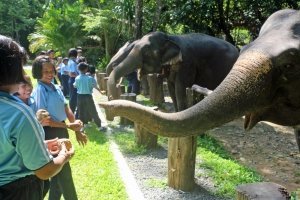 The lucky group of 20 that were welcomed for the day at PNEP as part of the Place2C programme had the Park exclusively to themselves, offering them the opportunity to meet the elephants, learn about them – and have some fun.

The students, aged 7-12 years, learnt about the important role of the Asian elephant in Thai culture as well as the management, welfare and history of these magnificent animals.  They watched as the daily health checks were done, and saw for themselves the care given to the elephants.  Then, of course, the best part:  they got to feed the elephants with the 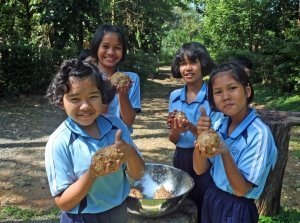 supplement food balls (which they had helped to make) and lots of bananas. 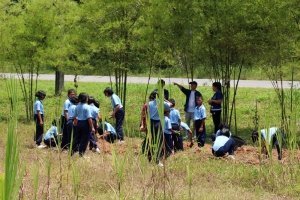 Later in the afternoon they all took part in an elephant themed treasure hunt with educational clues (and plenty of prizes) until the final clue led them to helping the PNEP’s volunteers to plant grass for future food for the elephants.

“Our children had a lovely time at the park” said Miss Pissamai KomKirin, Manager of Yaowawit School.  “They really liked the programme that was organised.  Thank you for this great opportunity”.

The Children met the STEF Thailand Chairman, Jake Thaotad, who commented “We were so pleased to sponsor the visit of these lovely children to the Phang Nga Elephant Park.  The smiles on their faces as they met the elephants and fed them bananas was a joy to see.  They also learned so much from the fantastic team at the Park.  STEF Thailand is very proud to be associated with the Place2C project” 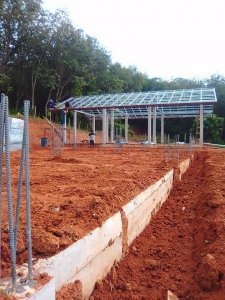 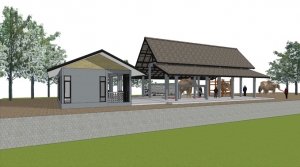 Thanks to some wonderful support from several trusts and foundations, as well as remarkable generosity from many individuals, we are already two-thirds of the way towards our target to complete the elephant clinic.

Work is well underway to finish the veterinary office, laboratory and clinic foundations and these should be completed in October 2019. We are now actively seeking funding to finish further work on the roofed barn where the elephants will be treated, the reinforced floor, and the haha (recessed vertical barrier) essential for loading and offloading the elephants. We also need funds to drill the bore hole and provide a water storage and supply system for the clinic. The drainage is already in place and one amazing donor has given us a gift so we can buy and install our solar panels and electric power requirements, which are now on order. Once the roof is on the office, the panels can be put in place. 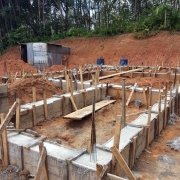 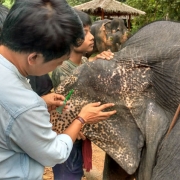 You can read about our renewable energy plans here.

As with any new building, the site must then be made good, the paddocks prepared, the mahout huts put in place and the veterinary supplies purchased. Thanks to another generous donor, we have our mobile vet clinic and we are already talking to members of the veterinary profession about identifying a suitable vet to work with us out of the clinic. It is going to be a very exciting year as Southern Thailand Elephant Foundation starts to contribute positively to the health and welfare of the Asian elephants of Phang Nga Province and surrounding areas. 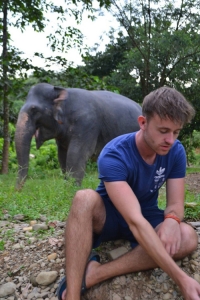 The Trustees of STEF are lucky to be supported by four Volunteers, who have given their time freely to help us in our mission. It is time to publicly thank them for their work and to express our appreciation for their efforts. You can read a bit about each of them if you click here. 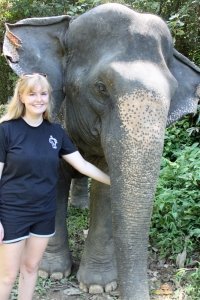 Two of the team, Blaid (left) and Jess (right), at different periods each spent several months working in Southern Thailand as volunteers at an ethical elephant park. Both are keen environmentalists who care passionately about elephants, their future and their welfare. Jess is now working as a Research Agronomist for a Biotechnology company in Nottingham, and Blaid, a qualified engineer, has a dynamic post with a multinational energy company with an office in central London. These two great people are helping us with our fundraising. 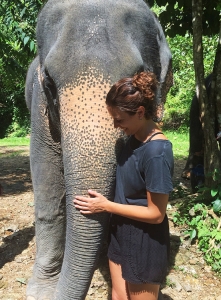 Abi, the third UK-based member of the team, has not worked in Thailand but she has made a visit to see for herself and to learn about our work and mission and after that was determined to assist us. She has an amazing background in business, travel and tourism and is bubbling with ideas to help us to promote the charity using social media platforms and in looking for companies and individuals who would like to be associated with our work. We are benefiting from her enthusiasm and marketing skills. 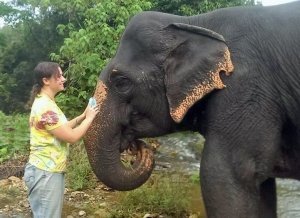 In the USA, we are lucky to have Sarah (left) working for us. Like Blaid and Jess, Sarah also worked with elephants in Southern Thailand as a Volunteer in 2018 and  saw for herself what can be achieved practically and effectively for the health and welfare of domesticated elephants. With a lot of experience working with animals, Sarah wants to help STEF do more to protect and care for this endangered species.

All of these young people share our passion for the Asian elephant. They all have busy lives of their own yet somehow find time to give several hours a week to working to assist us. We sincerely thank them all. If you are able to help them a bit in their work to raise the vital funds we need please do so. You can contact us for further information by clicking here. One of the team will get back to you asap!