Caring for Elephants – a Major Responsibility 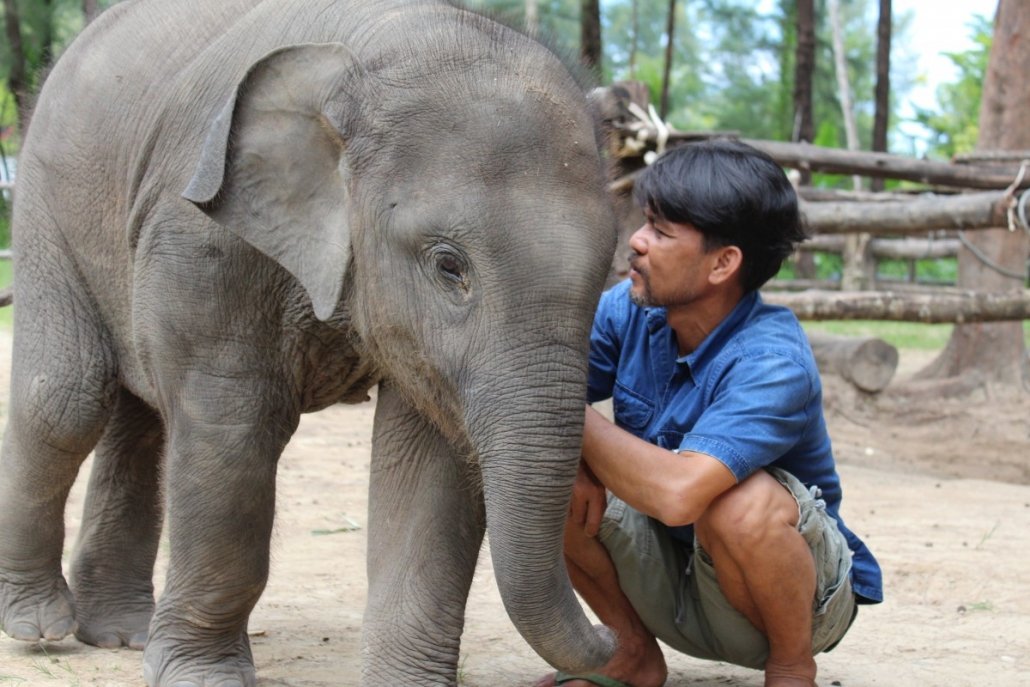 Adorable and cuddly, but without good care and management an elephant can grow up to be dangerous

Although elephants are usually thought of as gentle giants, working alongside them can be dangerous, and elephant handling is a skilled profession.

The ability to control a domesticated elephant at close proximity is as essential for the safety of the elephant as it is for the handler (known as the kwan-chaang or mahout).  Habituating elephants to regular human contact allows many medical procedures to be carried out without restraining the elephant or sedating it. Close handling also allows an elephant’s kwan-chaang to conduct daily health checks and to move his elephant between grazing areas. Using positive reinforcement, elephants can learn verbal commands such as stop, forward, backwards, left, right, lie down, lift foot. A good kwan-chaang will build a trusting, one to one bond with his elephant (see previous journal).

Elephants can become uncooperative if they are frightened, for example by a loud noise. A kwan-chaang should know what spooks his elephant so he can react quickly and responsibly. If an elephant panics and is around people, this could turn into a dangerous situation. Responding with punishment often further upsets an elephant. It is also unlikely to work well in the long-term as it can affect the elephant’s mental health, so the elephant may behave unpredictably in the future. A common method for safely communicating with an elephant is to gently tug on its ear. This reminds the elephant that his kwan-chaang is there.

If an elephant becomes extremely agitated, it may be impossible to control such a huge animal without the use of a guiding aid. The most well-known aid is the ankus, which has become a point of concern for many because of its potential for abuse. The ankus was not designed to be used as an aggressive control aid, as can be understood by its shape. When used correctly, the underside of the hook is placed over the top of the elephant’s ear or around the top of the leg, in order to guide or steer the elephant. The hook curves around the limb for grip, but the tip should be blunted in order to prevent scratching of the skin. When used in this way, the ankus can protect the elephant in an emergency situation where there is imminent danger to either the elephant or people.

It can be necessary to have an ankus on standby when an elephant is being asked to stand still for a vet to take a blood sample or to give an injection.  The ankus can also be used to help lift an elephant’s feet during health checks and to steer the elephant during training. It is accepted as the appropriate tool for handling elephants by elephant veterinarians and elephant keepers around the world.  Most of the time though, an elephant with a trusted kwan-chaang will respond to their voice and touch alone.

Whether or not you approve of elephants being domesticated and trained by kwan-chaangs, STEF’s first objective is to treat all elephants in need of medical care without judgement.  Through our work as an elephant charity, we aim also to educate and encourage elephant handlers to look after their elephants with kindness and respect in order to give elephants a better life.  To help us achieve our goals, please consider becoming one of Medicine Angels.

[Click on the photos below to enlarge and read captions]