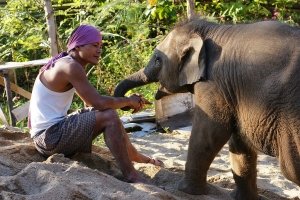 A Kwan-Chaang with a young elephant

Being a Thai elephant carer, or ‘kwan-chaang’, is not just a job; it’s a serious lifelong commitment. Read on to see what makes a true kwan-chaang.

The work of a kwan-chaangs has traditionally been a highly respected, honourable profession. Each man would live closely with his elephant, making best use of the forest to keep his elephant well fed and healthy. A kwan-chaang and his elephant would often come together in their youth and be together for life. It takes years to build a trusting, cooperative relationship in which an elephant responds to the kwan-chaang’s verbal commands and they both read each other’s minds. A kwan-chaang should be able to understand his elephant’s body language, mood and health, and predict how it will react to different situations.

The traditional kwan-chaang lifestyle is still practised in many parts of Thailand and in some ethical parks, but times change, and young men today increasingly want jobs with greater independence and time-off. Sadly, there are some elephant camps that are driven by tourism where inexperienced elephant handlers, with very little training, are recruited and given charge of an elephant. Such camps are irresponsible, employers often pay low wages and are blind to the health and safety needs of both elephant and human. Inexperience and ignorance always threaten animal welfare and can easily lead to abuse and accidents.

Such untrained handlers may be called ‘kwan-chaangs’ or ‘mahouts’, but the genuine kwan-chaang knows that negative reinforcement and abuse do not help to control an elephant, whereas trust, affection and proactive communication leads to bonding and mutual respect. The true kwan-chaang will live alongside his elephant, often for years. Every day he will check his elephant’s health and ensure she gets several cooling baths, good water to drink and plenty of suitable food. In this way, the kwan-chaang knows he will always recognise any sign of ill-health or upset and can deal with it promptly and caringly.

It is not in a kwan-chaang’s interest to harm his elephant, which is like a member of his family, and of course his source of income.  There are no shortcuts, and poor training and inadequate understanding of the physical and psychological needs of an elephant is unacceptable.  Here at STEF, education is one of our main remits. We encourage the traditional practice of pairing each elephant one-to-one with its own kwan-chaang. Basing this pairing on the personalities of both elephant and carer helps secure the strongest relationships possible.

The next post in this series will outline the challenging legal situation surrounding Thai elephants and how this finally changing. Check back soon!

These cookies collect information that is used either in aggregate form to help us understand how our website is being used or how effective our marketing campaigns are, or to help us customize our website and application for you in order to enhance your experience.

If you do not want that we track your visit to our site you can disable tracking in your browser here:

The following cookies are also needed - You can choose if you want to allow them: