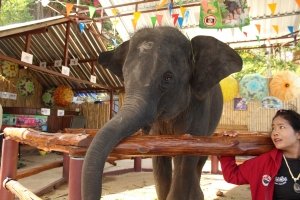 Two elephants at a Phuket elephant park were recently treated for lice by the STEF Veterinary Officer, Dr Aon. This may sound like a minor problem, but lice on elephants can cause major discomfort and damage to the skin if left untreated.

Lice are wingless insects that are generally host-specific.  So, fortunately, the elephant louse, Haematomyzus Elephantis, won’t spread to humans or other animals.  The elephant louse is large (about 3mm long) and easily seen with the naked eye. Its head has a long, rigid snout called the rostrum with a pair of sharp mandible rasps which enable it to pierce the thick skin of an elephant, feeding on its blood and on skin debris. It takes just 1 to 2 weeks for lice to reach maturity after hatching from eggs that have been deposited on an elephant’s hair and cemented into place by a female louse. These adult lice can live for 15 to 40 days.

Lice depend on their host for survival, and can be transmitted from one elephant to another only by close body contact, which may occur with maternal care of infants or when individuals touch each other during greetings or other social interactions. In the case of the two elephants at the Phuket park, it was the younger elephant Hansaa (a five year old female) who was found to have lice, and she was injected with a single dose of Ivermectin. But because Hansaa often plays with Thongkum (a 69-year-old female), the treatment was also given to Thongkum.  The elephants will now be monitored, and a booster injection given in six months.  The treatments were supplied free of charge by STEF.

Left untreated, the population of lice on an elephant will build up, especially in the colder months, and cause the skin to become dry and scaly. The elephants scratch frequently, often traumatising their skin, and they can become very irritable and lash their tails against objects or the sides of their body. Although lice tend to favour behind the ears and the base of the tail, they can be found anywhere on an elephant’s body, usually tucked into the folds of their skin.

You could help us pay for Elephant medications like Ivermectin by becoming a Medicine Angel.