You are here: Home / News / Latest News / Waiting for water 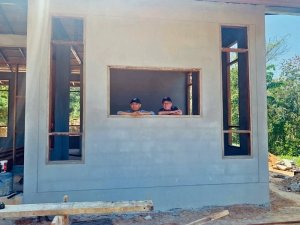 Initial drilling for the bore hole at the Ban Ton Sae veterinary centre (see: Drilling for water) ran into problems in the early stages when the drill struck rock.  So drilling had to be moved to a new site, a little further from the clinic building, where a bore hole has now been created and capped off, awaiting installation of the pipework to connect it to the holding tank, from where it will be pumped to the clinic building.

At a recent visit to the site, STEF’s President, Sir Richard Armstrong, was shown the bore hole and subsidiary work.  The pipe connections are expected to be made shortly, providing water for the newly built veterinary clinic which will be opening later in the spring to receive its first elephants.  Applications are currently being made for the appointment of a Thai veterinarian, specialising in elephants, to take up the post at Ban Ton Sae.  The vet will also provide a free mobile service to domestic elephants in the Phang Nga region.

In spite of the setback to the bore hole, which was funded by a generous donation from the Marjorie Coote Animal Charitable Trust, the work is still coming in on budget.  Progress is also going well on the large barn, where sick or injured elephants will be treated, although further funds are still needed to finish this building.  STEF is committed to seeing this project through to its completion as part of our mission to give domesticated elephants in Thailand a better future. (see Our Mission)