The Role of Elephants in Buddhism 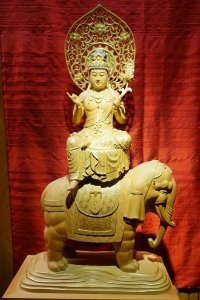 The Bodhisattva Samantabhadra on an Elephant

Elephants have an important role in both the origins and the modern-day following of the Buddhist faith; a faith that is integral to Thai culture.

Renowned for their wisdom, intelligence and patience, elephants have long been associated with the enlightened Buddha, whose teachings (dhamma) founded Buddhism. Scriptures describe Buddha as the epitome of an elephant – calm, poised and alert. Like an elephant, he was said to turn around to see behind him instead of looking over his shoulder[1]. It is said that, before being reincarnated in human form, Buddha lived as an elephant many times, which means that elephants are too sacred for Buddhists to eat.

Elephants frequently represent Buddha in Buddhist texts. Many believe Buddha is reincarnated from white elephants which descended from heaven. Even today, white elephants are associated with godliness and royalty, and revered because of their rarity. Queen Maya, who ruled northern India (now Nepal) over 2500 years ago, is said to have dreamed of a white elephant that disappeared into her side. The Queen believed that this higher being had enabled her pregnancy and that her son would be a powerful leader. She subsequently gave birth to the Buddha Prince Siddhartha.

The Lotus Sutra, a sacred scripture of Buddhism, describes the elephant as “meditating” and “utterly composed”. The scripture relates Buddhist values to the elephant’s physical attributes, stating that “Dhamma is in his belly”, the tusks represent “equanimity”, the large head represents “careful consideration” and the tail represents “solitude”[2].  Buddhists believe the physical world is generated by the inner energy, or karmic activity, of sentient beings. As guardians of Buddha and Earth, the elephants’ physical strength supposedly indicates mental strength and responsibility. Because elephants are so wise, many Buddhists believe elephant symbols can evoke ‘luminosity’- a clear state of mind pursued through meditation. This may explain their prominence in Asian architecture (see journal post Elephants Everywhere).

Elephants have been credited with helping Buddha to reach enlightenment (an understanding of the meaning behind the physical world). This understanding constitutes karmic activity, which many believe generates the physical world in order to guide followers. The Buddha also used elephants in parables to teach his philosophy (look out for our next journal article on elephants and religious teaching). He chose the elephant’s way of life as one to aspire to: elephants, females in particular, are loyal to their leader (matriarch) and family; they only resort to physical aggression if needed for defense; they are usually calm, patient listeners. This resembles the meditative state which Buddhists hope to embody for passive, reflective learning. People dedicated to pursuing enlightenment, or ‘Bodhisattvas’, are often depicted astride an elephant (as in our lead photo), suggesting that knowledge brings power.

The Buddha spoke of the tendency of male elephants to seek solitude in the forest. It is in a forest where the Buddha allegedly found enlightenment. Buddha said “there is no companionship with a fool; let a man walk alone, let him commit no evil, with few wishes, like an elephant in the forest”[3]. Buddhist monks and nuns still practice in similarly remote areas, observing the elephants and the forest for spiritual guidance. This idea is depicted in the parable of the Wise Tusker, in which an elephant is upset when other elephants carelessly destroy the forest and invade his space. He leaves for a secluded spot and finds Buddha, who had left his community to meditate. Solitude enabled them to connect and understand each other. The Buddha said “this unites mind with mind…the enlightened sage and the elephant … agree, they both love the solitude of the forest”[4].

The elephants and jungles of Thailand definitely make a peaceful and inspiring place, whatever you believe.

{Click onto the photographs below to see full size}