You are here: Home1 / News2 / Latest News3 / Elephants and Tuberculosis 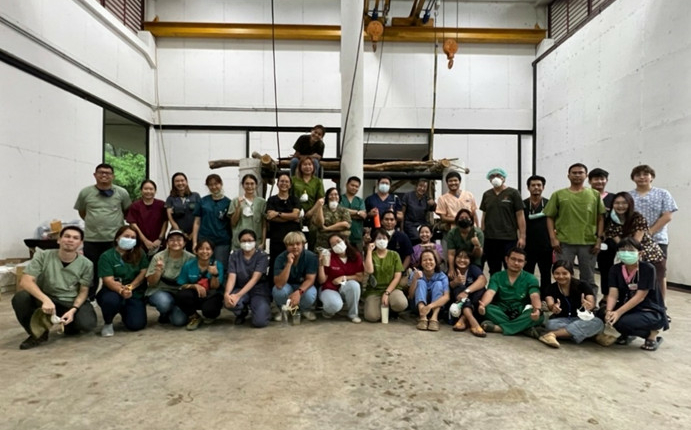 Delegates at the Tuberculosis  Workshop at Thailand’s National Elephant Institute

STEF’s Veterinary Officer, Dr Aon, recently attended a workshop at the National Elephant Institute in Lampang, Thailand, on “Respiratory Disease Surveillance in Elephants 2022”,  to understand more about tuberculosis (TB) in elephants.  The key aim of the workshop was to learn how to collect tuberculosis samples by using a technique called Bronchoalveolar lavage (BAL), and to learn more about TB treatment and management.

In elephants, there are often no clinical signs of TB until advanced stages of the infection, and proper diagnosis and treatment of TB are still not well established. The gold standard currently is direct detection of the mycobacterium organism using Ziehl-Neelsen staining, microscopy, and the use of PCR on bacteria harvested from culture collected by a “trunk wash”. But the technique of trunk washing can put the operator at risk and it has low sensitivity. There is also the possibility of sample contamination and false negatives.

The BAL technique, which is a relatively new procedure for elephants, can obtain more target samples, reduce environmental contamination and obtain better visual on the respiratory tract.  The technique requires standing sedation and a local anesthetic to avoid any pain for the elephant and to relax the area, after which a 3.5 metre long endoscope is introduced to the trunk opening, and then forward through the larynx and into the trachea.  A catheter is then introduced and sterile saline injected into the bronchi at different depths.  A suction pump is used to aspirate the fluid into a test tube.  These samples can then be tested for mycobacteria,  and if any are found or suspected, further tests are conducted to identify the species and subspecies. Sedation of the elephant is reversed using naltrexone and atipamezole.

According to the WHO (World Health Organisation), around one-third of the world’s human population is infected with TB, and 60% of all TB cases live in Asia. Approximately 10 million people are diagnosed with TB each year, and 1 million die from it. TB also occurs in other mammals, such as cattle, which affects national economies, and the disease has zoonotic potential. Prolonged and close contact with human TB cases may result in animal infection, especially in elephants that are in close contact with their mahouts and their families in countries such as Thailand, Myanmar, Sri Lanka and India, where the health risk for human elephant-human infection is high.

In zoos, TB has been reported in both African and Asian elephants, but with a higher incidence in Asian elephants. Transmission between elephants and humans was first reported in the US when 13 employees tested positive from tuberculin skin tests after being exposed to TB-infected elephants in the quarantine barn at an elephant sanctuary in Tennessee in 2011. Other examples of keeper staff exposure to elephants with TB have been reported at the Los Angeles Zoo, Oregon Zoo, Albuquerque Biopark and Taronga Zoo in Australia.