One Week in the Life of an Elephant Vet 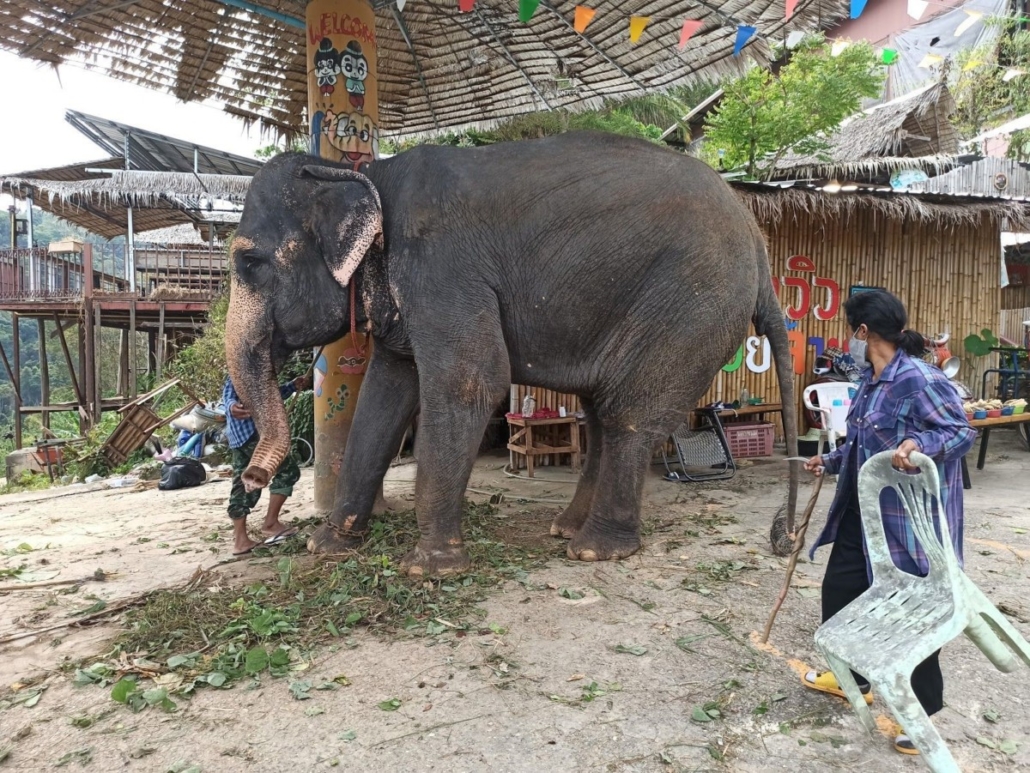 With every call-out of the mobile clinic, STEF’s veterinary officer, Dr Aon, sets off never quite knowing what she will find and whether or not she will be able to make a satisfactory diagnosis and treatment of the problem. The incident described below was a particularly difficult and, ultimately, desperate case on which Dr Aon worked night and day to resolve.

It started with a request to visit a 50-year-old female elephant called Thongkhum who had not wanted to walk for three days. On examination, she appeared to have abnormal movement in both hindlegs – when she stepped on her left or right hind limbs, each leg was held up for one or two seconds before she put it down again. There was no swelling on either hind limb and no sign of any injury, so Dr Aon was unable to pinpoint an obvious source of pain. She provided Thongkhum with an intra-muscular anti-inflammatory injection, and left the owner with some anti-inflammatory tablets and a recommendation he keep Thongkhum in a relatively small area close to a big tree that she could lean on. Dr Aon also consulted to two other experienced veterinarians, who both agreed with her treatment.

At 6.30 am the next day, Dr Aon received a video from the owner showing that Thongkhum still had the same problem, and was told that the elephant had slept standing, which Dr Aon considered a bad sign. At this time there was no hoist available at the Klok Kloi veterinary centre, so Dr Aon suggested Thongkhum be taken to the Krabi Elephant Hospital (KEH).  Dr Aon arrived at 10am to check up on Thongkhum, and found that she was still eating and drinking normally. Knowing that the elephant would soon be transferred to Krabi, Dr Aon left, only to be called 10 minutes later with the news that Thongkhum had fallen down. Fortunately, she managed to stand up again, but was unable to move much, so Dr Aon gave her a steroid injection and also plenty of saline solution to keep her hydrated.

Dr Aon stayed with her and monitored her closely. Unfortunately, after a few hours, Thongkhum was accidentally released from her stand and she stepped backwards onto a downwards slope and fell. For several hours she lay, unable to stand. It was hot, sunny afternoon, and Dr Aon continued to supply her with saline solution to prevent dehydration. The owner decided to hire a 24-ton crane to lift her up and, after several hours of attempting to lift her safely, she was eventually helped back to the building. It was now no longer possible to transfer her to KEH because she couldn’t stand on her own.

Dr Aon monitored Thongkhum all that night, supplying her with fluids and medication. At 4am, she noticed that the colour of Thongkhum’s urine was brown/red, an indication of severe muscle damage. Dr Aon battled on that day with continuous injection of fluids, and provision of anti-inflammatory and stomach ulcer medication, and that evening she was joined by Dr Yui from KEH. Both veterinarians decided it was too risky to transport Thongkhum to KEH as she might collapse in the truck. Her owner agreed with them. That night she developed a fever and, in spite of drinking normally, she still needed saline solution throughout the night.

The next morning a wooden construction was built to encourage Thongkhum to stand on her own whenever she could. Her fever had subsided and she appeared to be in slightly better condition. However, when the results of her blood tests came through the following day, they still showed dehydration, high enzyme function of her liver and kidney, and high creatine kinase enzyme levels, indicative of muscle damage. Dr Aon stayed with Thongkhum to monitor and care for her, but after two more days her condition still remained critical. It was explained to the owner that her relocation to KEH would not make much improvement and, further, that the transportation was a risk to her. However, the owner insisted that she go to KEH that day at all cost. Thonghkum was transported lying down in the truck, her body supported by rubber tyres, and arrived at KEH at 8pm. Sadly, an hour later, her condition worsened and she died. It had been a very stressful and traumatic time for everyone involved, and Dr Aon had stayed with Thonghkum day and night to try to save her.