The Thai Elephant’s place in History 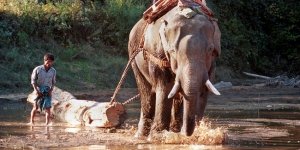 Elephants have been a vital part of the Thai economy for hundreds of years. Read on to see how their role has changed, and their numbers declined.

Thai elephants have been domesticated for centuries and, like horses in other countries, were extensively used in combat – a ruler’s power was often measured by how many elephants he controlled in battle.  This practice continued in Thailand right up until the 19th Century, after which elephants became used mostly for logging and other heavy work, such as bridge building and jungle clearance.

When, in 1989, the Thai government effectively banned commercial logging by revoking all logging licenses in natural forests, some 3,000 domesticated elephants found themselves out of a job.  The ban was vital to protect the forestry in Thailand, but it was a disaster for elephants and their owners.   Furthermore, the traditional kwan-chaangs (or mahouts), once valued for their pivotal role in looking after their elephants, were now frequently underpaid or had no income at all to feed themselves or their elephants. The pitiful sight of elephants being taken by their desperate kwan-chaangs to beg on the streets of Bangkok or other cities, or perform circus tricks for the tourists, has now, thankfully, been banned and is less commonly seen.

Although a booming tourist industry in Thailand offered new hope for domesticated elephants, the lack of regulations sometimes resulted in abuse and neglect.  For many elephant owners, the cost of keeping their elephant, now that it no longer had regular income-earning work, became a burden they could not afford. As a result, many of these elephants ended up in sanctuaries of varying ethical and welfare standards, Unfortunately, once domesticated, elephants become too dependent on humans to survive in the wild.

At STEF we believe that ethical tourism can provide support both for domesticated elephants and their kwan-chaangs, and that, combined with education, this is the best way to help elephants to have a sustainable future in Thailand.  Little more than a century ago there were over 100,000 elephants in Thailand; now there are about 3,000 domesticated elephants, and perhaps 2-3,000 wild elephants – mostly in national parks.  Ethical tourism is one of the best ways to help stem the decline in numbers and help to ensure the elephant’s importance in Thai culture is retained for future generations. Here, they can at least be provided with a natural habitat and a guarantee of good husbandry.  The elephants can be properly cared for and managed in dedicated ethical parks and sanctuaries, and tourists can visit, learn and interact with these magnificent animals.  For STEF, the welfare of the elephant will always be paramount, but we also want there to be a sustainable future for the Asian elephant in Thailand.

You can read more about the role of elephants in Thai culture here.

The next post in this series will explain how the role of kwan-chaangs has changed alongside that of elephants in Thailand and why kwan-chaangs are so important. Check back soon!