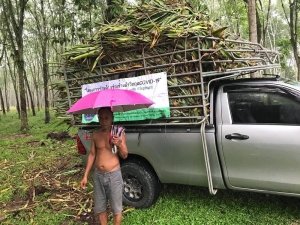 Mr Nuch, one of the many elephant carers that STEF has been helping during the Covid-19 lockdown in Thailand

Our photos show some of the many elephant owners (at least 150 in the southern provinces of Thailand) who have been receiving regular food supplies for their elephants since the lockdown began in March.  These owners are keen to express their thanks to everyone who has enabled this to happen, including to those who have donated so generously to our appeal on JustGiving. The owners didn’t have their elephants with them when the photos were taken because their animals often live some distance from where the trucks can get to deliver the food, but they always show up to thank the team of volunteers for these essential supplies. The photos were taken in the rural areas in Krabi and Phang Nga Provinces.

Our main photo is of Mr Nuch who is well known in Krabi and who has been looking after elephants for more than 40 years. He comes from a long tradition of elephant carers – his family have looked after elephants for over 150 years.  Mr Nuch’s elephant is called Somboon, which means “Comfortable”.

Below are four more photos (click on them to get the full size). The first is of a young boy who is helping his father to look after an elephant called Somrak, which means “Got Love”. The second shows Mr Pon, a mahout who has been working with elephants all his life, and whose family have a strong tradition of elephant care. His elephant is called Keerong, which means “Pettish”. Then there is the mysterious Mr X (yes, that really is how he is known in Krabi Province) who owns an elephant called Wasana, meaning “Halo”. Our final photo is of Mr Jod, from Phang Nga Province, who looks after a male elephant called Mongkol, meaning “Auspicious”.