An Elephant in the Tower of London 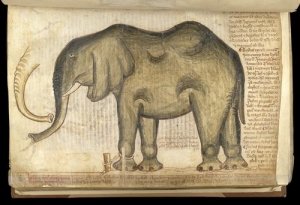 How does one king impress another? By giving him an elephant, of course. At least that’s presumably what King Louis IX of France thought in 1255 when he presented Henry III with an African elephant. It was indeed an impressive and, at that time, extraordinary gift, but not a very practical one.  Particularly so because Louis gave Henry the elephant in France, so it was the English officials who had the headache of getting this “monster” across the Channel and into London. And while it was clearly an expensive and therefore generous present from Louis, it proved costly to its new owner as well.

First the elephant had to be transported by ship to the port of Sandwich, and from there it was made to walk to London, passing through various villages on the way, much to consternation and awe of the locals, who would have never seen anything like it, even in pictures. It is believed to have been the first elephant ever to set foot in England.

It finally arrived at the Tower of London around September that year, and was housed in specially constructed accommodation only 40 ft long by 20ft wide, which had cost £22 to build (about £17,000 in today’s terms). A further £24 was spent on its food and keeper over the next nine months, though there is no record of what food or drink was provided. Sadly, and perhaps not surprisingly, the elephant didn’t survive for long, and died sometime during the following year.

Some sketches of the elephant were made by the chronicler of St Albans, Matthew Paris, and can be seen at the British Library. This link also gives a more detailed account of the elephant in the tower.

[Click on photos below to enlarge.  Main photo: British Library)