The Story of the STEF Veterinary Centre 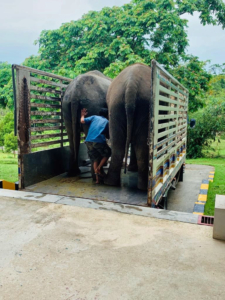 Choosri and Namneung, the first elephants to arrive at the STEF Veterinary Centre, offload from their lorry at the specially constructed ha ha

We’ve come a long way since the end of 2017 when the Southern Thailand Elephant Foundation was first registered as a charity with the aim of raising funds for the care and welfare of Asian elephants. From a plot of land full of old rubber trees, to an up and running elephant veterinary centre, our first major project has so far survived a Covid pandemic, damage caused by heavy monsoons, unsuccessful as well as successful fund-raising initiatives, troublesome builders and more, all with a small team of dedicated volunteers.

Jakrapob Thaotad is the person at the heart of this story (see How it all began). He wanted to support the welfare of Thai elephants, alongside educating people about the sacred animal of Thailand. From a burning ambition to help elephants to the opening of the first NGO Elephant hospital in Southern Thailand, it has been a remarkable success story, and there is still more to come.

Here is our timeline:
November 2017: Jake’s first step was to gain sufficient funding for his project so, working with Dr Andrew Higgins, STEF was duly registered with the Charity Commission for England and Wales. Soon afterwards our sister charity, STEF Thailand, was registered with the Governorate of Phang Nga Province, Thailand. STEF’s first project was to raise funds for the creation, from scratch, of an elephant veterinary centre.

Feburary 2018: Jake secured a 6.5-acre plot of land, about 30 minutes’ drive from the town of Khok Kloi, where the veterinary centre could be built. The site was largely covered by an old rubber tree plantation most of which had to be removed and replanted with a more diverse range of trees. A month later STEF launched its Sponsor a Tree campaign, aiming to renew the site with trees that provided a more sustainable ecosystem as well as food and shade for elephants. The clearance led to the discovery of three water pools, badly in need of dredging, and the decision was taken to develop these as a place for the elephants to bathe and cool down.

January 2019: The designs for the veterinary centre were finalised. These included an office, laboratory and elephant barn, to be reached by a 270m track from the local road, itself little more than a hard, dirt track. Power arrived at the site later in 2019 in the form of solar panels on the office roof, thanks to sponsorship. Sponsorship was also responsible for the running costs of a new pick-up truck which would ultimately become our mobile veterinary clinic. By the end of 2019, the track to the centre had been completed, major landscape work had been done, and the office and laboratory nearly built. We were ready to go ahead with the large elephant barn (to provide a safe place for the elephants to be treated) – we just needed the funds pay for it.

January 2020. Funds arrived in the form  of a huge donation from the Hawthorne Trust, enabling the completion of the barn and the remaining work for the veterinary office, later named the Hawthorne Building, in honour and thanks for the Trust’s fantastic support. With this quick progression, STEF aimed to have the centre ready to receive elephants later in the year. But that was before the arrival of Covid-19. Luckily the virus didn’t stop our plans to get the mobile clinic up and running.

July 2020: Dr Pattarawan Phumpanna, a specialist Thai veterinary officer, was appointed to work at the new centre. Known to everyone as Dr Aon, she began helping to prepare the centre for the first government license application, which in due course and after rigorous inspections, was eventually granted. The centre was now able to receive its first batch of drugs, fluids and ointments in preparation for the first clinical trip of the mobile unit.

November 2020: In spite of COVID complications, the day arrived and Dr Aon ventured out into the surrounding villages of Phang Nga to provide mobile services to the local elephant communities, including some very remote ones. The mobile clinic soon began to have a significant impact on the health of local elephants, and it became evident just how important the veterinary centre would be once it was fully open. Trustees, helpers and supporters were inspired and galvanised by the success of Dr Aon’s work with the local elephants, and soon further work on the site was underway: a secure storeroom for medications was built, a standby generator was purchased (as back-up for the recently installed electric elephant hoist), accommodation was planned for the elephant carers who would accompany their animals to the centre. All these projects needed funds, but we were fortunate to secure enough through generous donations and grants.

September 2021: Building work (such as the mahout accommodation) had been slowed down by the coronavirus restrictions, but we were thrilled to make progress on the diagnosis of a deadly elephant virus by securing a vital piece of technology – a mobile qPCR machine. This acquisition was the first of its kind in Southern Thailand and was purchased thanks to funding from our amazing supporters in Thailand. The qPCR machine can detect in less than a minute the presence of Elephant Endotheliotropic Herpesvirus (EEHV) – an often-fatal virus for young elephants. Catching the virus in its early stages increases the chances of survival.

January 2022: the fifth year of STEF’s existence! A few essential jobs still needed to be done, such as installing a weighbridge (to accurately record the weight of a sick elephant – essential for the calculation of medication doses and to monitor health) and some road repairs to allow access for large lorries transporting elephants, but finally in March we were ready to do a test run of the veterinary centre with two elephants kindly loaned to us from the Phang Nga elephant park. “Choosri” and “Namneung” were duly put through their paces, testing out the weighbridge, the ha ha for unloading, the stocks and hoist in the barn, the paddock area and, while they were there, receiving injections for skin parasites. All the systems worked well, and the site was declared ready to receive its first patients – a huge milestone for STEF and for the elephants of Southern Thailand.