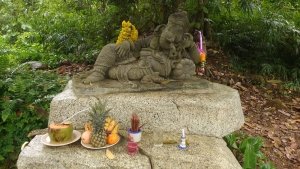 A temple to Ganesh in Phang Nga Province

Elephants are important to many faiths and cultures, helping to connect people around the world.

Elephants are known to be determined and very powerful, but can resort to physical aggression when defense is necessary.  Usually, however, they are calm, peaceful and alert. Their unique characteristics are known to influence Thai culture and are closely linked to Buddhism (see part 1, Elephants in Buddhism), but they are also connected to other religions and teachings.

The Buddha often used the example of an elephant in his philosophical teachings. The well-known parable of the Blind Men and the Elephant is usually attributed to The Buddha, whose teachings founded Buddhism. In the story, a group of blind men observe an elephant by touch alone, but begin arguing when they each get different impressions of it. One touches the trunk and says it’s like a snake, one touches the tusk and says it’s like a pole, one touches the leg and says it’s like a pillar and so on. Although focused on the same thing, no one is fully correct. The Buddha used this parable to illustrate the importance of having a complete view[1].  The story can be used to show that although different sects and religions have unique values, they also have shared meanings, and none should be accepted on its own.

The parable also appears in Hindu texts. Elephants are important in Hinduism, from which Buddhism emerged, and the two religions share the same deity, Indra, who rides a flying white elephant called Erawan (or Airavata in Sanskrit – see photo below). Indra and Erawan descend from heaven and battle demons, protecting the earth. In Thailand, Erawan is usually depicted with three heads (although sometimes 33 heads), and is considered to be the king of the elephants and capable of controlling the clouds. This is why the rare white elephants in Thailand are considered to be sacred and are associated with good fortune.

Ganesh (see photo below) is the most universally worshipped Hindu deity. His elephant head, set on a human body, symbolises his wisdom, with his large ears dedicated to listening. Many Buddhists see him as a bodhisattva (someone on the way to enlightenment; see part 1, Elephants in Buddhism) who embodies compassion. His mother, Parvati, made him her guardian, so his image is often depicted around doorways and temples. His trunk is said to sniff out good and evil. Ganesh has a broken tusk; some believe it broke in defending his parents’ home. Other texts describe him deliberately breaking it, dipping it in ink and helping the wise sage, Vyasa, write the Mahabharata  – said to be the world’s longest poem, with over 200,000 lines. This is perhaps why Ganesh is known as the Remover of Obstacles. Many followers see Ganesh as the bringer of fortune and pray to him when facing a challenge. In yoga, the Ganesha Mudra pose can supposedly invoke Ganesh and crush one’s mental barriers.

Elephants have long been a cultural icon in Asia, transcending religions. Nowadays, sadly, conflict often results when elephants are seen as agricultural pests, trampling crops and causing other damage in their search for food. Traditional Thais still worship elephants as sentient beings. They know elephants respond in kind to communication and respect. STEF upholds this philosophy, and we exist to educate communities and protect the Asian Elephant.

[1]”Some monks and priests are attached to their views…like those who see only one side of a thing.”    (Ud.6.4)   https://www.accesstoinsight.org/tipitaka/kn/ud/ud.6.04.than.html