Elephants Working Together to Solve Problems 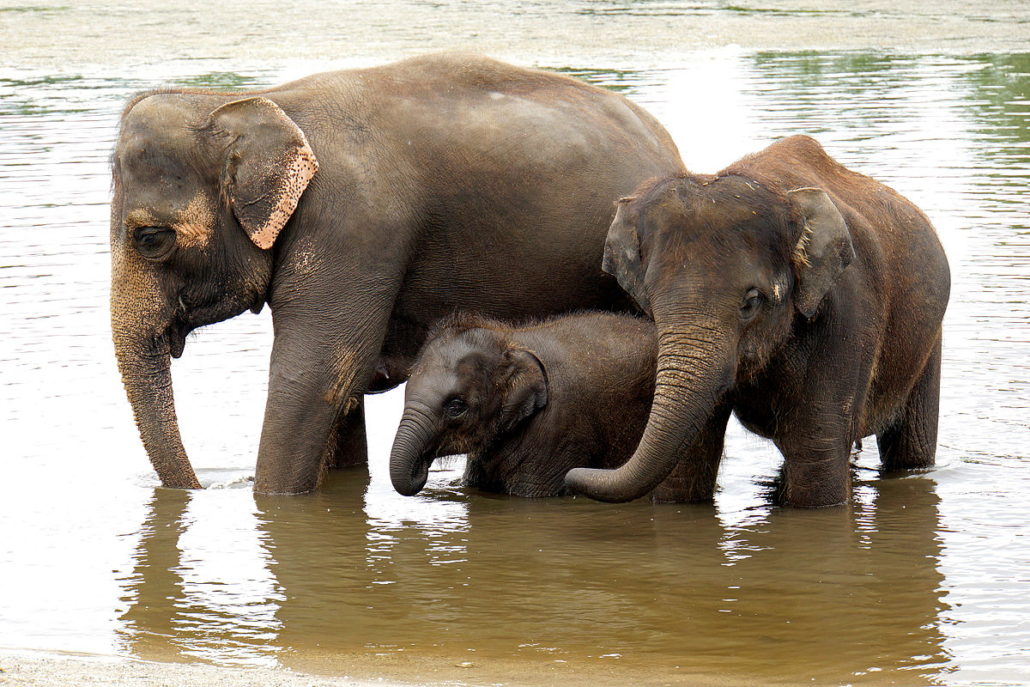 Elephants often help each other by working as a team. If one elephant gets into trouble, other members of the herd often try to help. They also circle around infants to protect them from predators.

To solve problems as a team, animals need to read and respond to each others’ behaviour. They also need self-awareness, which is the ability to understand the impact they have on others and the environment. These abilities are also important for perspective-taking and empathy.

A famous test of self-awareness is whether an animal can recognise itself in the mirror. Highly cooperative animals like great apes, dolphins and bird species have passed this test. An elephant was also successful – she reacted to a spot on her forehead by pointing to herself, rather than reacting as if her reflection were another elephant.[1] Other elephants struggled with this test, but elephants have poor vision. They would certainly not rely solely on their vision like this in the wild, but would also make use of sound, touch and scent.

In another study, elephants were investigated for their understanding of body-awareness – whether they understand the impact their bodies have on the environment.[2] Elephants were trained to walk onto a mat, pick up a stick and pass it to a researcher, in exchange for a tasty treat. Sometimes, the stick was attached to the mat by a string, meaning the elephant’s weight prevented them from passing the stick. When this was the case, the elephants stepped off the mat, suggesting they had body-awareness.

Finally, experimenters have shown the team-working ability of great apes, birds and dolphins in an experiment which was recently adapted for elephants.[3] Some food was placed on a table. The table was out of reach of two elephants, who were standing alongside each other. A rope was looped around the table and the rope ends were given to the elephants. The only solution was for both elephants to pull their rope ends at the same time, pulling the table towards them. If only one elephant pulled the rope, it would slide away from their partner, meaning both would lose their chance of getting food. The elephants quickly learned not to pull until their partner was ready. By reading each other and working together, they achieved their common goal.

This study also showed that different elephants use different strategies when solving problems. One sly elephant stepped on the rope and let their partner do all the pulling! One cautious elephant waited for their partner to arrive before even approaching the rope. Different elephants also use different strategies to get around farmland defence systems. Individual elephants have been observed either uprooting fence posts or simply trampling fences.[4] While one herd may invade a crop field, another may stay away, depending on individual members and how they interact and make group decisions. Monitoring individual elephants and group dynamics may therefore help scientists predict herd behaviour.